Jesus Holy Church is headed by 3 Pastors who are brothers. 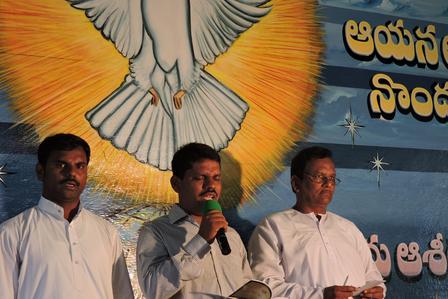 Today Jesus Holy Church has over 2,500 people in the congregation.  There are 3 main churches and 35 branch churches.   This ministry was started in 1985 with 5 people.

As young boys, these brothers followed the Hindu faith of their family.  Their mother heard the gospel and became a Christian.  After their mother’s death, the father continued to teach his sons the Hindu religion.  The oldest son Narayana Samuel remembered what his mother had told him, and started to read the Bible for himself.  Their father was a strong Hindu and banished Samuel from the family.  Samuel wanted his family to learn about Jesus and accept Him as their Savior.  In the absence of his father’s presence, he taught his 2 younger brother’s about Jesus Christ.

The Holy Spirit continued to work in Samuel’s life and called him into ministry and to serve in Giddalur and the surrounding villages.  In 1985, Samuel started Jesus Holy Church with 5 members in Giddalur.  The area is very poor.  They conducted services in tents then rented rooms as his congregation grew.    After 4 years they built a small hut for prayer meetings.

Samuel’s 2 brothers, Suresh and Jayra, continued to study the Word of God and were also called into the ministry.

Pastor Samuel’s church now has 900 members that attend church weekly.  His brother  Jayra started 2 small churches in poor areas of Bestavaripet and Darsi, just outside Giddalur. The congregation of these 2 churches is 100 members.  His other brother Suresh started his main church in Hyderabad and 2 smaller branch churches.  He has 300 members in his congregation of these 3 churches.

Many of these 35 branch churches of Jesus Holy Church are in the slums as well as in tribal areas.  These 3 dedicated Pastors have a heart to save souls and bring their fellow countrymen to the knowledge of Jesus Christ.  They have baptised over 1500.  These Suresh brothers regularly conduct outreaches with hundreds of people in attendance.  They are dedicated to bring more souls to Christ.  They have continued to plant new churches.  To date they are in over 300 villages bringing the Good News.